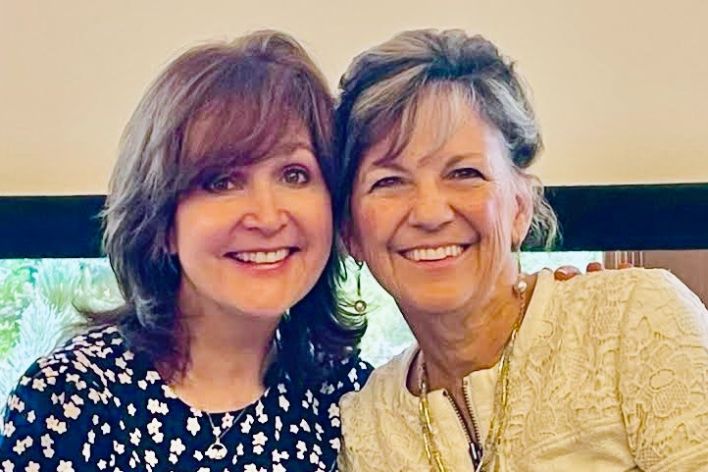 Note: the following is a story from my book The Pursuit of Happi-Nest, only you are getting the expanded version at zero cost! Thanks interwebs! (note: the book is on Amazon, Barnes&Noble, etc.-but it’s only 9.99 here and now: https://www.cedarfort.com/products/the-pursuit-of-happi-nest).

Back  to our story: Lori, (she is on my right, above. This was taken while I was recently a guest speaker, and I chose her as a guest, guest speaker in Aspen Grove). Lori is/on her way to becoming a goddess, only she lives on earth and she doesn’t have any idea that she is.

She has blessed more people than I could count, and there are so many that only heaven knows about. I wish everyone could have at least an hour with her. She radiates mega light. Even her own sister, bestie Dana, recently said this about our Lor-Lor (a nickname I gave her): “she is light years ahead of all of us spiritually! I am so honored Heavenly Father sent me down to earth as her sister! how did I get that gig? Lori is amazing!”

When Lori was in high school, guys from the football team would come over just to sit on her lawn and be in her presence. They just wanted to soak up some of that Lori glow. Seriously, if you have ever wondered if there is a mother in heaven (more on this fascinating topic here: https://www.youtube.com/watch?v=rqGgwKhfoqI) then Lori is like an earthly version of this woman. Lori is warm, kind, friendly, non-judgemental, funny, and of course, a spiritual Olympian. Girl knows her scriptures and then some. More than some. She is tuned in to the spirit big time.

One day in high school, we were in the same car, which was rare, because she is three years older than me, and usually I was hanging out with her sister who was/is my same age. I was telling a story and I added a swear word for emphasis. Lori was in the passenger seat, and I was in the back seat. I have never forgotten her reaction. She slowly turned around and very gently pressed her finger to her hopeful, smiling lips, like you would when you are saying “Shh.” That’s it. That’s all she did. Then the spirit washed over me like a warm shower. What in the heavens. I instantly, deeply, knew that swearing was wrong. Like really wrong. I swore off swearing forever. I kept that promise until decades later when I was trying to hang a heavy shelf and I dropped it on my foot. That “D” word is still in there, but I try hard to never let it escape my lips, ever since I saw that kind finger pressed to Lori’s.

Someday I will tell more Lori stories. But for now, I love the heck out of you, dear readers.